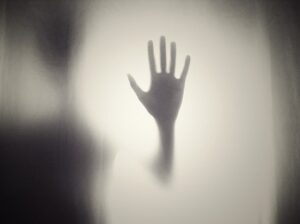 He humiliated me over and over. But I took it. I made mental, emotional excuses. I loved him. The abused will do that. Don’t ask me why.

He insisted we take pictures. I did not want to take the shameful, salacious videos, but you know how when you can sense the end of a relationship and you’re desperate and you’ll do anything to salvage something that no longer exists? Castles made of sand, sculptures made of water, but there will be no not trying.

Reluctantly I did it, but it didn’t work. I entered his apartment to find him and his work-buddies looking at something on the flat screen. They howled and laughed. My appearance produced an abrupt condemning silence.

The background music gave it away. It was our private, intimate pictures that amused them. I was horrified. Then I realized I was a romantic fool. To them I was no longer human, just a thing, an image on a flat screen.

And that was the nature of their work, information technology. They take that which was human and turn it into bloodless pixels on a screen. It should not have been a surprise.

I froze until an inner strength took control of my body.  I didn’t know I possessed such resolve. It made things clear. I pretended not to notice but willed myself to be brave and expressionless. I found strength in revenge. To me they were no longer human.

“I forgot my cellphone,” I said.

I went into the bedroom and waited an appropriate time.

“Got it, see you later.” I shut the door. Their laughter and shouting resumed.

Someone referred to me as “USDA Prime.”

“You should have had her keep her nurse’s cap on,” a voice said. “That is sooo… sexy.”

“I saw that movie, ‘The Nightcall Nurses.’ She could have had the leading role,” another said.

There was more laughter.

Tears blurred my vision. I could barely see where I was going. I used my hands, like a blind person would, to probe my way to my car. My love turned to hate. It is a fine line until you cross it; then it’s not so fine. The emotions are as intense, but refocused.

I thought of revenge and to “punish with impunity” and the tears dried never to return. I recalled that line from one of Edgar Allen Poe’s stories. Edgar was talking to me from the grave, as he did from time to time. But he also warned that I should not be destroyed by my act of revenge. Poe said, “A wrong is unredressed when retribution overtakes its redresser.”

So, I must keep myself safe.

But how would I exact a satisfying revenge and not suffer?

I would get even, but not be destroyed. “He who seeks a path of revenge must first dig two graves.” Not in this case buddy boy. I would keep myself safe and beyond suspicion. My ex taught me how: IT technology.

Technology kills romance but will allow for the perfect crime. Crime can be romantic, especially killing an ex-lover who betrayed you.  What passion! What romance! Poe would understand.

My ex told me that the computer allows for the perfect crime because it keeps the perpetrator invisible.  He worked in the informational technology department of the hospital. He bragged that IT could frame any doctor the administration wanted kicked off staff. They asked him to do it all the time and he willingly, and apparently, enthusiastically agreed.  For the doctor there was no defense, the computer was beyond reproach. He had two years of community college, yet the doctors feared him. What a terrible way to make a living. But I could tell he loved it, the power. That should have given me a clue.

He thought of IT as if it were a video game. The decisions he made in concert with others in the IT department were those of silly computer geeks who had no idea of the impact on the doctors, nurses or patients. To him people were Dr. Pac-Man, Nurse Pac-Man or patient Pac-Man. They did not go to med school or nursing school and most never went to college, yet they made decisions crucial to patient care.

Again, don’t ask me why.

He allied with hospital security and that alliance resulted in unchallenged power in the hospital. They could do anything on the computer and remain unaccountable, invisible.

That gave him the courage to post our videos on the hospital E-Mail. He edited himself out. I was not surprised at his depravity and it only strengthened my resolve and the righteousness of what I should, had to do. He would do it to somebody else. But I could not return to work, my presence would be a distraction to the other professionals and patient’s lives could be put at risk.

My anger and hate congealed to a mission.

I never let on. I made him think that I loved him and would do anything for him. I continued to make love to him. He called it f…king. I never use that word. It makes romance seem gross.

I always smiled at him.

I learned to make love from my gentle heart- that he hardened.

If he wasn’t banging my forehead into the wall, he wasn’t making love.

He was a pimp.

He had a weakness- he loved cars. I owned a new roadster. I would never let him drive it. It was a sore point between us. It was the only thing I would not give him.

He was a car enthusiast, a grease monkey turned IT expert. He fancied himself an automotive expert as well, but his knowledge fell short of mine.

I knew he would jump at the chance to take the car out to the flats.

I picked him up. He kissed me. I let him.

“May I drive it Sweetcake?”

“But just this once?”

“Okay, but let me drive to the flats, then the car is yours. We have to drive up the mountain slowly, especially in this heat.”

He wore black leather pants, pretentious driving gloves and driving shoes.  He had to dress the part, always, whether he drove or not. Leather doesn’t breathe. He would get very hot, very fast.

I smiled at the thought.

He got in on the passenger’s side.

He took a deep breath. The hot air made him cough. “It’s like getting into a sauna,” he said.

“Wait till we get out on the salt flats. The sun will bake to over one hundred and twenty degrees. We should turn back.”

“Dampness would make it worse,” he said. “The heat will keep others away. I’ll have the flats to myself.”

I tried not to smile.

You’ll find out soon, I thought.

Sun bleached animal skeletons littered the side of the road like the catacombs.  Skeletons made me shiver, life evaporated and desiccated.

We got to the flats. I kept the car running. I got out. I put the key- fob in my pocket. I looked at him. He had sweat beading on his forehead, pouring down his nose.

“You coming with me?”

“No, I want to watch you drive. See if I can learn anything.”

“Here,” he said. “Take my phone and take a video. I’ll post it on the Internet.”

I knew he would want me to take videos, the narcissist. Now I had his phone which contained our videos.

He sped off. I had his phone and mine. It was very hot. My shirt was wet. He didn’t look back; he didn’t care what happened to me. But I would be okay. I brought a sun umbrella and water and sat down covering myself in the portable shade.

He drove the car very hard. Doing circle eights and doughnuts. He hit the brakes and skidded. The tires squealed and cried. I felt sorry for my car, but she would understand.  We were in this together.  I would have to give her up anyway, without my nursing job I would be unable to make the payments.

I could see the brute smiling. Finally, he stopped to pick me up. He slid the car in my direction. I had to jump out of the way. He could have hit me, but I smiled at him.

He smiled back and shut the engine. Got him! He tried to open the door. There was the sound of metal clicking.  He smiled at me, such a nice smile. He trusted me and wasn’t frightened yet.

I went to the driver’s window. I showed him the fob, being careful not to get too close to the car otherwise it would start to operate again, and he could drive off. I had to stay six feet away. He reached for his back pocket and the security of his cell phone. I held his phone up. His eyes were now wide open and frozen in panic. I would always remember him like that. It was beautiful.

I looked him in the eye. I smiled at him. I took his phone and showed him the pornographic pictures he had posted on the hospital website.

He got the picture.

I blew him a kiss. In retrospect I should have mooned him, but that’s not me.

I could hear the desperate metallic clicking of him trying to open the door. I thought of a rat that would chew his leg off to get out of a trap. It appeared my ex was a very unlucky rat.

I turned and slowly walked away. I thought of my humiliation and now my revenge.

It got a bit cooler as I distanced myself from the flats. I called for an Uber. They were so dependable. I took a rock and smashed his phone to bits. The cell phone CEO won’t release any information to the authorities, no matter who gets hurt. The FBI can’t crack their security.

I could see my ex in my mind’s eye. He would try again and again to open the car to get out. The door would not open. I never felt a need to tell him about the emergency ejector lever. He was an expert after all, about cars and technology.  If he was as smart as he said he was, he would have a fighting chance.

The electronic seatbelts would remain fastened. He would panic and flail at the windows which were very difficult to break from the outside, impossible from the inside.

If he had his wits about him, he would open the glove compartment and examine the owner’s manual, but there would be no owner’s manual to tell him of the emergency escape lever. He would find a short story collection of Edgar Allan Poe. Poe was a romantic, just like me. I consider him a friend. To me he is still alive. Writer’s words live forever, and therefore, so does the writer. Edgar gives me help and hope and advice from the other side.

My ex would discover a bookmark leading him to read “The Cask of Amontillado.”

Now for the rest of the Information Technology department. I would summon more help from Mr. Poe. Perhaps a homicidal orangutan? No, I was just being funny. Something else, let me think, a premature burial. Yes, and I know how to lure them, like a Venus flytrap.

I would wear my nurse’s cap.

It would take time and careful planning, but without my nurse’s job, I had plenty.