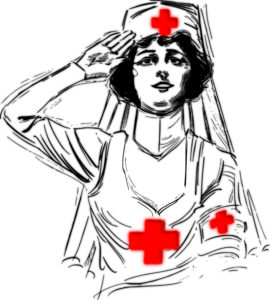 In the interest of patient care the Massachusetts Nurses Association seeks legislation to put a limit on the number of patients assigned to an individual nurse. They request one nurse to care for four patients in the non-ICU setting and a one to one ratio in the ICU. A recent editorial in The Wall Street Journal, Bad Bedside Manner in Massachusetts, Oct 17, 2018, takes exception to their request. This, the article states, would not be fiscally responsible as it would drive up wages and increase overtime for nurses.

However, there is a strong argument that nurse’s salaries should be increased anyway. This is supported by an article appearing in Clinical Orthopaedics and Related Research. It notes that total healthcare salaries increased from 663 billion per year to 865 billion per year from 2005 to 2015. Twenty-seven percent of the increases were for non-clinical workers. Nurse’s salaries rose only 3%. Over ninety percent of nurses are women and women are paid less than men.

I see this as an example of institutionalized gender bias (organizational climate) which appears to be endemic in healthcare as noted by the results of a three-year study from the National Academies of Sciences, Engineering, and Medicine.

Two recent op-eds in The New England Journal of Medicine comment on the recent study from the Academy.

Times Up for Medicine? Only Time Will Tell highlights the findings of The National Academies of Sciences, Engineering and Medicine. Inequities for women in salary, career advancement and leadership opportunities are noted to be endemic in academic medicine.

It is stated that about 50% of female medical students are subjected to sexual harassment. (A study from 1995 found the same statistics.) It is not just unwanted sexual advances that are of concern but also the organizational behaviors that “convey hostility, exclusion, or second -class status about one gender.”

Overt sexual harassment is vulgar but with recent awareness and measures it is being exposed and it is to be hoped, contained and punished.

It is the covert sexual harassment that has prevented women from achieving the same heights in academic medicine. Covert harassment is pernicious because of is subtlety and acceptance and effectiveness for its beneficiaries. The few numbers of women in leadership roles don’t lie.

What is distressing is there is no inclusion by the Academy, or in the op-ed pieces from the NEJM, concerning the harassment of nurses. This seems like an unconscious form of gender bias and an “organizational climate” that got us where we are today and were in 1995. It forecasts that nothing is going to change.

Nurses are our colleagues (more so than the physician leaders who make policy) and should be included when speaking of the academic sciences. Their exclusion, by people who should know better, is unfortunate.

They appear to be invisible and marginalized.

To write in support of the nurse’s request for limiting patient numbers, I reviewed the history of the Ebola outbreak of 2014. A man exposed to the virus entered the United States under false pretenses. He became ill and was admitted to the Texas Health Presbyterian Hospital. Two nurses cared for the patient around the clock. The patient expired. Days later both nurses contracted the disease. Imagine the terror of the stricken nurses. They observed the patient die a horrible death, a fate that could, in hours, have been theirs.

Dr. Thomas Friedan, the director of the CDC at that time, opined a breach of protocol led to the nurses becoming infected. At the time it struck me as an insensitive response. Later Dr. Frieden admitted the CDC was largely to blame as the nurses had followed the inadequate CDC protocol to the letter.

As I reviewed the articles from the 2014 epidemic, I came across an update on Dr. Friedan. I was stunned to see a picture of Dr. Friedan, in handcuffs, being led out of a Brooklyn police station. According to sources he was arrested for alleged forcible touching, alleged sexual abuse and alleged harassment of a woman. A plea deal was denied and his passport surrendered. He is due back in court this November.

I hope the allegations are false as I have always had faith and respect for the leaders of American medical institutions and being the director of the CDC is a pinnacle. (I was further distressed to learn that his successor had to resign from the CDC because she owned tobacco stocks.)

Perhaps I have been naive.

The articles state that culture change begins with leadership, yet the leaders of most major medical institutions are male. You are asking them to purge themselves. Until they retire, change will be slow.

But the use of Title IX to enforce compliance and tie government funding for hospitals and medical schools to that compliance would bring the glass ceiling crashing down. Money talks.

Nurses would be included in the Title IX enforcement.

Concerning nurse to patient ratios, rather than pass legislation, how about a government funded study that demonstrates the validity of the nurse’s request? If evidence -based research supports them it should not require legislation just implementation.

As a physician, I am witness to the unselfish dedication of nurses. Their heroism is similar to that of our first responders; the policemen and firemen.

It won’t be the doctors but rather the nurses who would be the first responders to Ebola or any other contagion that hits the hospitals or the country. They are as vulnerable, and brave, as the trained policemen and firemen. They should be viewed in the same light.

In Africa it is known as “The Nurse Killer.”

Olaf Kroneman, MD, is a nephrologist at The Southeast Michigan Kidney Center. He graduated from the Michigan State University College of Human Medicine, interned at the Mayo Clinic in Rochester, Minnesota, then attended the University of Virginia to complete a residency in internal medicine. He completed a fellowship in nephrology at Massachusetts General Hospital and Harvard Medical School. His work has appeared in literary magazines. He is also a 2018–2019 Doximity Author.