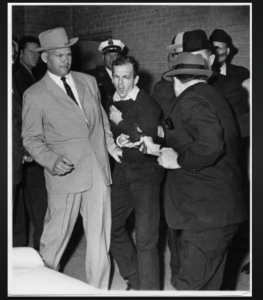 (Published in the 2019 spring/summer issue of “The Moonshine Review”)

From an early age, Bronco obsessed over the Kennedy assassination. He found himself in juvie on November 22, 1963, just starting his life of crime. Though old now, he still reviewed footage of the assassination before each job. He watched the event over and over. Early on he watched on an eight-mm projector, later on videotapes, then discs and now YouTube.

Times changed but he didn’t. Viewing the films not only prepared him: they inspired him. He thought the ritual brought him luck and, being superstitious by nature, Bronco understood the importance of luck.

JFK’s luck ran out that day in Dallas, but his never did.

Through the years, he evolved from a Sonny Liston knee capper to a deadly murder- for hire- button man.

He thought the Zapruder film cool, but it happened too fast and taken from such a long distance was blurry. Lately computer enhancement made it more graphic, and bloody but came too late in his career to be of help. The shot didn’t seem so tough to him, the car moved so slowly-and Oswald had a good, bolt action Italian made rifle: a Carcano 6.5 mm. The Italians may be lousy soldiers, but they made good guns, prizefighters, and hit men-independent wildcatters with a cool sense of honor. Oswald got off four shots, one or two had to hit the guy. It wouldn’t take two shooters. All that talk was wasted bullshit. Grassy knoll my ass, he thought.

After the Hoffa hit, things slowed down, business was bad.  Everybody went into hibernation so during this lull he took a trip to Dallas. He had to see it for himself. He took the family, but went to the Book Depository alone and sat at the window gauging for himself how Oswald had done it. At such an easy close range he knew he could have done it with a pistol. Hell, he could have thrown a baseball and hit Kennedy on his noggin.

He had a job to do-so he returned to the film advancing it slowly, frame by frame. The president’s head turned into a red fountain. Nearby two little kids sat on the ground; their parents-the mother in a matching red dress-covered them with their bodies. Damn, he wished he could have been there. He could have told the parents not to worry, there would be no more shots. The job was complete, the button pushed.

The president’s wife scrambled onto the back of the limousine to get out of the line of fire as the secret service agent finally got his ass on the back of the limo. What took him so long? And she wore that pink suit with all the blood on it. The hat looked dopey. She should have brought a change of clothes.

Bronco found the scene of Oswald walking down the hallway of the Dallas police station the most instructive. From years of careful observation, he’d memorized every move by every person. The cameras flashed at just the right time to cover Jack Ruby breaking through a line of reporters and photographers with well-choreographed hit-man moves. Fat Jacky-Jack aimed the pistol into Oswald’s stomach and killed him, BAM– Mafia style.

In his pocket Bronco kept a black- and- white photo of the actual moment. Jack, shoving the gun into Lee Harvey.  Unlucky Lee looked surprised, his mouth a big “O.” A gun like that -a short -barreled Colt Cobra had to be fired really close. Bronco saw Jack as the real star, the real deal-not just some titty-bar owner who happened to be in the police station. He figured Jack owed someone big, and this was payback. One shooter and one hitman. Jack in black with the gray and black fedora-gripping the revolver, his left hand on his hip, a roll of fat cascading over his collar. And his skin so white, Just like mine, Bronco thought.

The policeman, dressed in beige with a white shirt, dark tie, and cowboy hat, stood at Oswald’s right, giving Ruby a clean shot. He should have placed himself in the line of fire, taken a bullet, that was his job.

In the photo, Lee Harvey, who’d escaped a hit just the previous day, also wore black with a white shirt. The collar, peeking over the crewneck sweater, made him look like a college boy. He had a black eye. The bulls roughed him up, they’re the same everywhere.

Bronco repeatedly took his own Cobra out of its holster and practiced the Jack Ruby move. Jack was a right-hander. He a left-hander. Other than that, they could have been twins.

He wondered if Jack had any tats like his.

When Bronco learned Jack Ruby’s brother owned the gun he wrote him and asked if he could fly to Detroit and see the gun, hold it in his hand. He never got a reply.

The young guys favored Sigs and Glocks because they were faster and easier to use. But the Cobra had been good to him, like a lucky charm, a rabbit’s foot, with the serial numbers rubbed off and tape on the handle.

Outside it was getting dark-time to go. He put the white gloves on, got in his car and drove to the hotel where the mark hid. They always ran but no one could hide from the Outfit.

According to Bronco’s contact the CEO needed help. The CEO had always helped the Outfit with construction contracts, laundry contracts, food-service, trash hauling all legit businesses the Outfit needed as cover. The man even got guys from the Outfit on the board of directors.

All was on the down- low, until a picture in a college yearbook showed the CEO wearing black makeup and a huge Afro, dressed to resemble “Superfly.” A short person in a cardboard box trailed him, the box decorated like a boom box. The words “Ghetto Blaster” painted on the side. You couldn’t tell who was in the box-just arms and legs protruded.

At a news conference, the CEO apologized for appearing in the picture. Then his boss got to him and the CEO claimed it wasn’t him. He didn’t know how that photo got in his yearbook.

But the boom box-the only person who knew and could ruin everything for Outfit, was Bronco’s target. The boom box must be scared shitless or should be-because Bronco had been hired to push his button. The Outfit promised it would be his last job. They’d let him retire to Miami.

The boom box hid on the second floor of the motel in room eight. Bronco walked up the stairs and knocked on the door. The door slowly opened.

She looked frightened and very pretty.

Damn, he thought, why did it have to be a woman? He had daughters of his own.

He suddenly felt too old for this work. He breathed heavily from climbing the stairs- no longer lean and fit.  Now he had the roly-poly sinister bulk of Jack Ruby.

Bronco looked down at his feet: then raised the gun. What had to be, had to be.

Bronco felt each of the three shots from close range dropping the old Colt Cobra as he fell to the floor. Looking up at the Glock in her hand. She smiled and respectfully saluted him.

Bronco smiled, returned the salute. The Outfit didn’t let anybody retire from this line of work.

He closed his eyes.