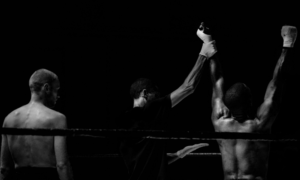 Your heroes can compromise you. Muhammad Ali put me at risk.

The first time I encountered Ali, then Cassius Clay, was on television. I was ten years old and saw this young black guy dressed in a tuxedo and top hat, brandishing a walking stick and reciting poetry. He was scheduled to fight Henry Cooper in England. The fight did not go as planned: Cooper knocked Cassius down with a left hook almost knocking him out. It would have blocked Clay’s path to a bout with Charles “Sonny” Liston and a shot at the heavyweight championship of the world. Clay got up and won the bout. Two things were revealed of Clay in the Cooper fight: One, he was a sucker for a left hook and two, he had a great jaw and could take a punch.

In 1964 my father and I listened to the first Liston fight on a transistor radio. Ali, or Clay, was a huge underdog but, miraculously, Cassius Clay won and became the heavyweight champion.

“Joe Louis would have clobbered both of them,” my father said.

My father didn’t like Clay and really didn’t like him when he joined the Nation of Islam and changed his name to Muhammad Ali.

The return match with Liston ended in a few seconds, captured by the iconic pose of Ali standing over the vanquished behemoth.

For the next three years Ali cleaned up the heavyweight ranks. The army tried to draft him, but he failed an intelligence test and so was ineligible. Ali replied, “I said I was the greatest; I didn’t say I was the smartest.”

Later the test was changed, and Ali passed and was drafted.

He refused to go, claiming a religious exemption. He was ahead of his time.

The boxing commission stripped him of his title, launching him into boxing exile. He gave up millions and the prime of his boxing career.

He believed in principle and an obligation to humanity, black and, in retrospect, white.

When I was sixteen, my friends and I drove to Florida. It was summer, hot, but we had nothing to do. We ended up in Miami and went to the Miami Beach Auditorium to see the local boxers.

Jimmy Ellis, Ali’s sparring partner, who was soon to be destroyed by Joe Frazier, sat at ringside. Then, wearing dark sunglasses and walking in alone, was the man: Muhammad Ali. The crowd got excited, mumbled, then the boos started and increased. They became deafening.

I liked and admired Ali and so started boxing. I fought in the Detroit Golden Gloves. I fancied myself a white Ali.

The next time I saw him was in 1969, still stripped of his title and reduced to barnstorming on college campuses to earn money. He spoke and was mesmerizing and funny, and he carried himself like the black statue of David with a twinkle in his eyes and a cherubic smile.

By 1970 and sealed by the shooting of four college kids at Kent State, sentiments changed. Ali was vindicated and became a spokesman for the baby boomers, black and white, who were not thrilled about a one-way trip to Vietnam.

The noble, steadfast Joe Frazier—whom I also admired—was seen as an imposter.

The money interest and a societal shift got Ali his license back.

I watched Ali’s first return fight on a grainy, closed-circuit, black-and-white screen. He fought Jerry Quarry who, though a good fighter, was outmatched and Ali won. What disturbed me was Ali’s lack of footwork. His legs were gone. He still had fast hands and ring savvy, but his greatness had past and he could be hit.

And Joe Frazier, who possessed a great left hook, hit him and beat him.

Ali’s career went up and down but became more compelling. His was the most recognized face on the planet, and boxing was only a small part of it.

But his fights were often a struggle.

Now that his legs were gone, he had to rely on his ability to take a punch. He would take many, and it would be his undoing and result in his future decline to Parkinsonism.

I often wonder how it would have turned out had he entered the army. His life would not have been in danger; he would have been kept out of harm’s way giving boxing exhibitions, just as Joe Louis had done in the Second World War. But by refusing to go, he gave up millions. In the two and a half years he was banned from boxing he could have fought with the same prowess he had in 1967 when he stopped Zora Foley. Then he could have retired with nothing left to prove.

He came back after his exile and was no longer the fighter he was in 1964.

My brief boxing career ended in 1970 and by 1973 I was in medical school. Ali kept on boxing. I continued to admire him and used him as a role model in the same light as I did some of the outstanding professors I encountered in medical school and later in hospital training. Some of my professors had Ali-like traits, and some had the alleged traits of Sonny Liston (who I believe can be forgiven under his circumstances).

The 1975 “Thrilla in Manilla” was a great fight, but was the beginning of Ali’s health decline. I find that fight disturbing because of its brutality.

And then there was that crushing blow from Ernie Shavers.

Early in my medical career I believed in the science of medicine as the key to professional success. I studied, reviewed the literature, wrote papers, obtained grants. After completing my training, I took a position in a community hospital. I tried to unite the academic and the nonacademic.

The community hospital engaged in a complex procedure, which surprised me. It assured me it was competent. I found its mortality rate was 26 percent, at a time when 3 percent was acceptable, and where I trained it was less than 1 percent.

What would my hero Ali do?

Correct. I tried, working through proper channels, to stop it.

The hospital came at me with both barrels. I was relieved from all administrative positions, and the president of the medical staff and the chief medical officer removed me from the staff. I was called a “disruptive physician.”

My illusion of science as key to success was shattered. That others would look away from the violation of humanity gave evidence to an ethical collapse in a profession that should have firm underpinnings in ethics and science.

I was out of sight and out of their minds.

Three years later I learned the hospital was sanctioned, and it could no longer perform the procedure, and this at a time when hospitals were not scrutinized as they are today.

My focus changed from the science of medicine to the philosophy of medicine, the history, the ethics, and the literature.

I tried to understand my experience. I read Aristotle, John Stuart Mill, and Immanuel Kant but realized Muhammad Ali was a good ethical guide and easier to understand.

But after almost forty years, I’m stunned by the moral and ethical bankruptcy of that hospital.

Ali became a hero but paid the price even though he was exonerated and later loved by society. He returned to boxing after his skills were diminished. Against the ingrained status quo, even when you win, you lose. They, the power, the machine, are too well organized.

Boxing has the Queensberry Rules:

You cannot hit below the belt, hold, trip, kick, headbutt, wrestle, bite, spit on, or push your opponent.

You cannot hit with your head, shoulder, forearm, or elbow.

You cannot punch your opponent’s back or the back of his head or neck (rabbit punch) or his kidneys (kidney punch).

You cannot throw a punch while holding on to the ropes to gain leverage.

You cannot hold your opponent and hit him at the same time or duck so low that your head is below your opponent’s beltline.

The Queensberry Rules civilized boxing to an extent.

Years later, and too late for me, hospitals adopted these rules: A physician may report care and safety concerns to the joint commission. A physician who reports an issue will not be subject to retaliatory actions, such as disparaging comments, unfair management practices, or corrective action. A physician should immediately report any behavior he or she believes is retaliatory in nature to the president of the medical staff and the chief medical officer.

It makes me laugh.

The problem is I would have had to report the safety concerns to the president of the medical staff and chief medical officer—the same people who removed me from the staff.

Perhaps Sonny Liston would have been a more useful role model.